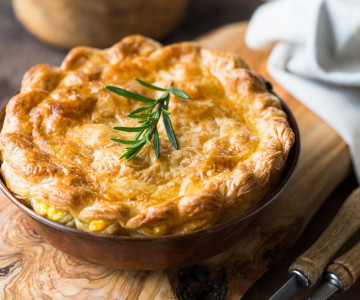 It’s no secret that us Brits are a nation of fully-fledged pie lovers, and there’s no better excuse than British Pie Week to indulge in a slice or two. Whether it’s sweet or savoury, shortcrust or puff, big or small, Creamline can help you get fully stocked and in the mood with our recipe and filling ideas! Simple to make at home, it’s a great opportunity to get the whole family stuck in this week.

Pies have a history as rich as the dish itself. Around in some form or other since the ancient Egyptians, the first published recipe was seen in ancient Rome, and butter and lard were eventually used in Northern Europe as the go-to fats – giving us a pastry that could be moulded into the pies we know and love today!

Interestingly, in years gone by the pastry case was often not necessarily seen as an edible part of the pie, being a handy way to help food last longer on sea voyages, for example, as well as making the food stackable.

Ready to roll your sleeves up and the pastry out? Fresh from our local butcher, Little Pigs, and our Greengrocer Best of Local range, we’ve got all you’ll need this British Pie Week.

Grab a pizza the action this summer!