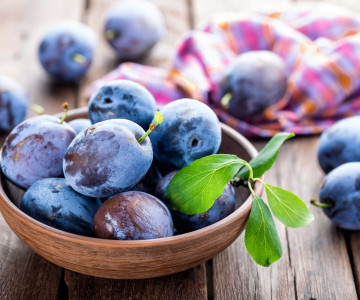 Last year saw the first ever National Plum Day celebrated in the UK, all about restoring the humble British plum as one of the country’s most popular fruits. Allegedly once the nation’s favourite, they were also one of the first fruits domesticated by humans and even helped the war effort back in the day!

Although much of Britain’s produce in the early 1900s was imported, there was one spot in England that was famous for its delicious locally grown fruit and veg. It was in the Pershore and Evesham Vale that renowned Pershore plums were grown and picked; the plum jam from this region helped feed WW1 soldiers on the Front.

Everyone from refugees, prisoners of war and schoolchildren played a part in helping to pick the fruit. One of the soldiers, William George Haynes, was even given permission to take leave in August 1916, returning home to help bring in the harvest in his native Worcestershire!

Plums are in season from May to October, which means that now is a great time to add a bunch to your next Best of Local order. They have a particularly low glycaemic index score, which means that despite their sweetness, they wont cause spikes in your blood sugar! They are also packed with vitamin C, making them one of the healthiest snacks you can include in your diet.

You can either order in singles or in packs of four – but why stop there? Mrs Darlington’s Plum Jam is a British institution! Sweet and fruity, it is locally sourced and made with love from our Crewe-based supplier. You could also give these Damson & Plum yogurts a try from Ann Forshaw’s Preston Dairy – the perfect pairing!

Dial up the flakiness this National Croissant Day!