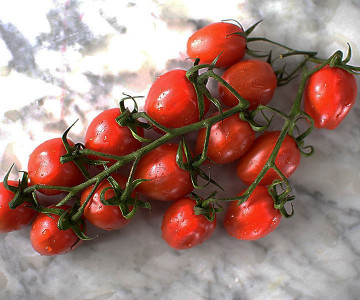 At Creamline, we’ve been celebrating all things tomato, to mark this year’s Tomato Week. Our rosy red, round and delicious tomato friends are about as versatile as it comes – they’re such a valuable ingredient, whether you’re enjoying some ketchup with your fry up, blitzing them up into a juice, or just enjoying them chopped up in a salad.

Where do tomatoes come from?

Though we might not regard tomatoes as exotic fruit, they are not indigenous to the UK. Tomatoes come from thousands of miles away, in South America. The first recorded instance of them being used is in 700AD by Aztec cultures but it is likely they have been eaten for much longer.

They didn’t journey across the sea to Europe until the 16th Century, when explorers to South America brought them back from their adventures. They originally did well in Southern Europe but as they moved into Western Europe, they were initially treated with suspicion as tomato flowers closely resembled those of the deadly nightshade plant.

The humble tomato is steeped in many interesting facts, read on to learn more:

·         Statistically: one in every four tomatoes in the world come from China.

·         You might think of tomatoes as just being red but you can get white, orange and even pink tomatoes.

·         Tomatoes are loaded with plenty of vitamins and minerals, which are good for you - including vitamin C, calcium and potassium.

·         Tomatoes are rich in something called lycopene – an antioxidant that is good for the heart.

·         You might think of tomatoes as vegetables but as they have internal seeds, officially making them a fruit.

We’re great fans of tomatoes here at Creamline. Do try out our Cheesy Baked Avacado recipe which incorporates cherry tomatoes, baked to perfection!

Did you Know? You can have tomatoes direct to your door from Creamline, delivered for free. We stock fresh, vine cherry tomatoes, as well as salad tomatoes.

Head over to our fruit and veg section to see the full selection and all the other market fresh fruit & veg we have.