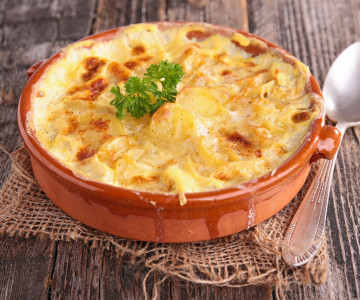 If you’re on a mission to cook more meals from scratch – you’re in luck! Creamline has a range of recipes, perfect for friends and family.

And the good news is that there are plenty of scrumptious vegetables at their best in January, to help keep mealtimes balanced and those winter colds at bay! From parsnips to potatoes and leeks- who says healthy eating has to be boring?

Eating seasonal produce has numerous advantages, fruit and veg usually tastes better, for example. Leeks are harvested from September through to May but are at their best in January. So, make sure your fridge is stocked up with them to reap the endless nutritional benefits;, they’re rich in potassium, folic acid, vitamin C, iron, fibre and beta-carotene!

Only the best will do for our customers so all of our fruit and veg is fresh and handpicked from Manchester’s Smithfield Market.

Read on for our go-to January recipe, which incorporates fresh, in-season vegetables and that hearty warmth that everyone craves throughout the cold winter months!

2. Take a shallow baking dish approx. 25x30cm rub all over with garlic, then grease with a bit of the butter.

4. Fry the bacon in a heavy based pan until they are crisp and golden (drain away any fat)

6. Pour over the cream until the potatoes are covered and dot with dabs of butter.

7. Bake for approximately 1 ½ hours until the potatoes are tender

1. Melt the butter in a pan and sauté the leeks until tender

2. Combine with the cheese and breadcrumbs, season and mix well

3. When the potatoes are tender (after approx. 1.1/2 hours) remove the baking dish from the oven.