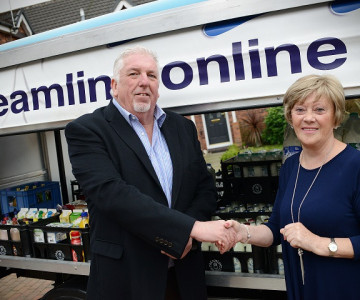 Cream of the Community Winner

Having called on the people of Greater Manchester and Cheshire to nominate community –spirited family members and friends for this year’s Cream of the Community award, we were bowled over by the entries we received.

One entry that really stood out to all the judges on the Creamline panel was Salford volunteer Jean Roberts, making her the well-deserved winner of this year’s Cream of the Community award.

We were in awe of Jean’s commitment to her local area, selflessly giving her time volunteering at the Worsley ‘Contact the Elderly’ group, helping tackle loneliness and social isolation amongst older people, in the form of a monthly tea party.

Nominated by her fellow volunteer Kaye Willan, who provided details of Jean’s inspiring actions, including her weekly volunteering stint at her local St Ann’s Hospice, which provides care for thousands of patients and their families and carers each year across Greater Manchester, who are affected by cancer and non-cancer limiting illness.

As the winner of the Creamline community title, Jean has received a £500 prize to be donated to the charitable cause of her choice, St Ann’s Hospice, an organisation that she has personally supported for 5 years.

As well as being awarded the Creamline charity donation, Jean and Kaye are both set to receive a three-month supply of Creamline’s new offering – a local market fresh fruit and veg service, which is delivered straight to your door.

Well done to Jean and to all those who were nominated. As the entries were so strong and it was simply too hard to choose just one winner, we’ll also be awarding a number of people the title of ‘Highly Commended’, so keep your eyes peeled for a little gift from Creamline in the next few weeks.

Creamline are looking for the Cream of the Community