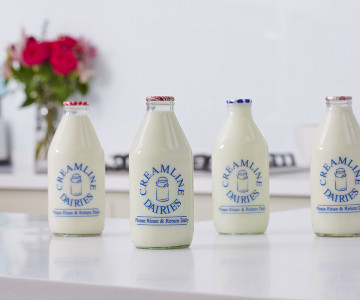 Milk is amazing stuff: it’s packed with vitamins and minerals, it’s been drunk by humans for over 10,000 years and you can turn it into everything from strawberry ice cream to stilton cheese. There have been a lot of world records set for everything to do with milk, dairies and cows. We thought we’d share a few of them in the lead up to October half term so the kids can surprise family and friends when they’re next reaching for that cool bottle of Creamline milk from the fridge...

·         Competitive eater Takeru Kobayashi can gulp down an astounding gallon (4.5 litres) of milk in a mere twenty seconds.  We’re in awe - don’t try this at home kids!

·       A Cuban cow called Ubre Blanca set the world record in the 1980s for the most milk ever produced in one day – 109.5 litres on a single day in January, that’s over four times the usual production rate for a cow. She’s so famous; she’s even got her own Wikipedia page.
·    A Norwegian ice cream company sculpted a record breaking dairy delight in July 2015 with the creation of this three metre tall ice cream cone – we’d like to see you try and eat this before it started melting!

·         Watch the Sun Motors Editor Rob Gill give his turbo charged milk float some bottle in this record smashing attempt to drive the fastest ever milk float over the 100mph mark.

·         The fastest ever recorded time for a marathon run in a dairy outfit was broken by American runner Joseph D’Amico in March 2013 when he managed to complete a full 26 miles in 3 hours and 9 minutes – all whilst dressed as a milkshake.