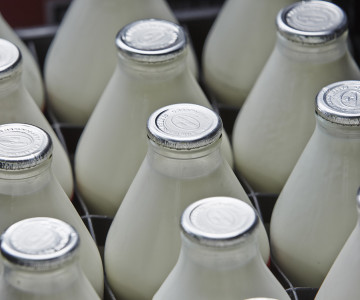 Landmark study could trigger a return to full-fat bottle milk

When choosing your preferred type of bottle milk, you probably consider the fat content - and many of us opt for semi-skimmed or even skimmed milk as a health-conscious choice.

But is full-fat bottle milk really unhealthy? A landmark study in the open-access journal BMJ Open Heart suggests guidelines introduced in the 1970s-80s are deeply flawed.

In 1977 and 1983, the UK and US governments both introduced dietary guidelines recommending a reduction in dietary fat, in order to tackle coronary heart disease.

But the new research, which looks at six relevant clinical trials from that time, with almost 2,500 male participants, claims there was no firm evidence to support the guidelines.

In particular, there were no trials with female participants, no trials to test the dietary recommendations, and no trial that even concluded dietary guidelines were needed.

Their statistical analysis also found no significant decrease in coronary heart risk for men who reduced their intake of dietary fat.

"It seems incomprehensible that dietary advice was introduced for 220 million Americans and 56 million UK citizens, given the contrary results from a small number of unhealthy men," the researchers write.

So after 30 years of guilt, perhaps it's time to focus on the facts, and reach for the full-fat milk if you prefer the taste.

Add organic bottle milk to your basket this September

Change-up and make the switch to glass-bottled milk