Try making these delicious, buttery shortbread biscuits. Perfect as an accompaniment to a cup of tea or instead of a full dessert, these biscuits are always a favourite. We’ve added a touch of citrus and cinnamon, to give them added flavour.

2) Beat the butter until softened. Add the orange zest, cinnamon and sugar. Work in until it’s well mixed.

3) Sift in the flour and cornflour. Mix until smooth and knead it as lightly and as little as possible.

4) Lightly flour the surface and turn out the dough. Roll into a large flattened round. Place the dough into a round cake tin lined with parchment paper. Gently work it to the edges.

5) Cut the dough into eight wedges. Crimp the edge with a fork and finally prick the centre all over with the prongs of the fork.

6) Bake in the heated oven for 20 minutes –or until it’s lightly coloured.

7) While it’s hot, sprinkle with sugar and serve when it’s cooled down. 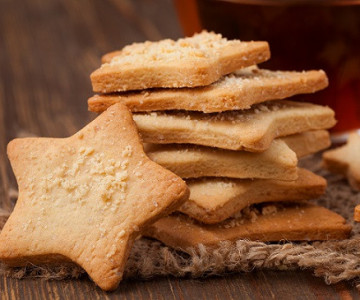