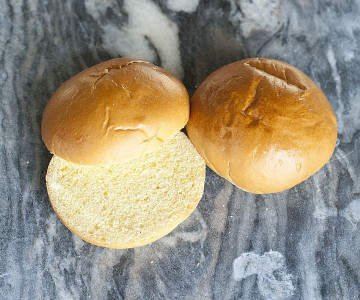 The eagle-eyed among you may have noticed that we have made two new additions to our BBQ range recently; brioche buns and rolls! Our local baker Thatchers’ have perfected the recipe, and it’s a longstanding favourite of their customers – for good reason. Read on to find out more about the sweet bun and why it has such a significant place in history…

Unsurprisingly, brioche originates from France, often made as a light, sweet bun made with lots of egg and butter. The first recorded use of the word was in 1404, and was developed from ordinary bread into a sweeter, richer and more expensive version!

The increased expense of brioche was one of the reasons Marie Antoinette allegedly landed herself in hot water. When told that France’s peasants were starving and had no bread, legend has it that she remarked ‘Qu’ils mangent de la brioche’ – commonly mistranslated as let them eat cake! History has since shown however that there is no official record of this, leaving the brioche mystery unresolved…

Over the past couple of years the brioche bun has become a popular mainstay in burger and BBQ dishes. Making a deliciously rich, sweeter alternative to traditional barms, they’re also a perennial favourite with kids.

Why not give them a try in your next Best of Local order? The light buttery buns are ideal with burger patties, whilst the rolls go perfectly with Little Pigs’ hand-prepared sausages. Browse this summer’s BBQ range here.

Make someone’s (new) year by nominating them as a deserving doorstep!