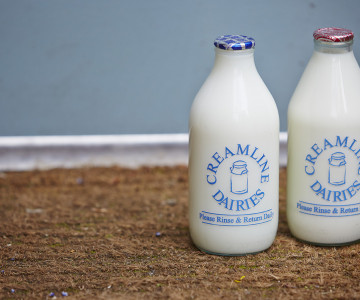 Here at Creamline, we’re celebrating one of our favourite annual events – World Milk Day. This year marks the fifteenth ever World Milk Day, which was established in 2001 by the FAO (that’s the Food and Agriculture Organisation of the United Nations). The aim of the day is to recognise the importance of milk & related foods and the importance that they have around the world.

How Long Have Humans Been Drinking Animal’s Milk

Man has been collecting milk from animals for as long as animals have been farmed.  Animals were first farmed around 10,000BC – this era is known as the agricultural or Neolithic revolution. This process marked a massive change for mankind: for the first time, humans didn’t need to spend all their time gathering food in what is known as ‘hunter and gatherer’ lifestyles.

By farming crops and animals, people could then trade these goods and for the first time they had free time – this had an absolutely enormous effect on everyday life. It paved the way for huge cultural shifts in areas such as learning, communication, invention and exploration. It paved the way for the establishment of civilisations and the creation of society.

Make the Most of World Milk Day

Today there will be a range of celebrations going on around the world to mark the occasion. Be sure to follow the hashtag #WorldMilkDay to keep up to date with everything going on in the world of social media – so what are you waiting for, raise your glass for World Milk Day!